The day I kissed a dead man 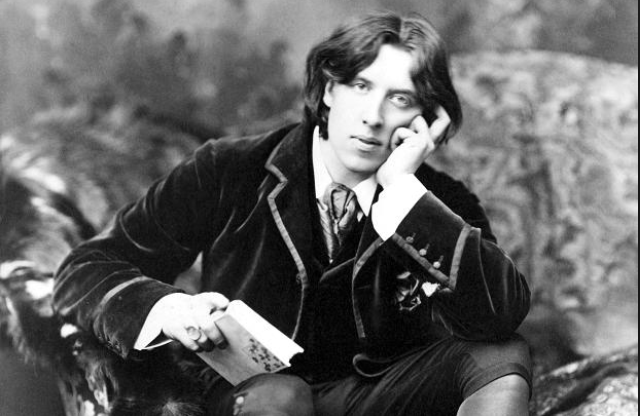 Somewhere in the depths of a Parisian cemetery there is a tombstone with my lipstick on it.

It is smothered in red from people all over the world. People who wanted to kiss a dead man.

When I found Oscar Wilde’s resting place one crisp autumnal day I was overcome. I harbour a deep intimacy with the writers I read and it was this feeling that drew me to kiss the tombstone.

As a matter of fact, I am always drawn to touch and I don’t think I’m the only one.

Have you noticed that in any place of cultural significance there is a little roped barricade? Sometimes there’s even a guard.

Yup. I’ve noticed them too. They are for people like me.

They’re for the touchers.

I remember being sternly reprimanded in the house where Shakespeare was born. Repeat… Shakespeare. I found myself looking at the very bed where he entered this mortal coil.

There I was. And there was the guard in the corner of the room. What was he going to do? Arrest me?

With lightning speed I lunged forward. It was ungainly but I like to think Shakespeare would have appreciated the comedic nature of my efforts. I also like to think that we had a little moment, the Bard and I.

Touching has always been a way for humans to connect but when one of the two humans has been dead for over four hundred years, touching something that once touched them is as close as you can get.

Some even think that much more is shared through touching than you think.

Elizabeth Gilbert, author of Eat Pray Love, spoke about the nature of creativity in Brisbane this year.

She said that when she and fellow novelist Ann Patchett both came up with an identical novel at the same time they were stunned. They traced back to the moment when they met and had shared a kiss. In that moment, Gilbert said, the novel transferred through touch.

In one of the most universally recognisable images on Earth, The Creation of Adam on the ceiling of the Sistine Chapel, depicts God breathing life into the first man, Adam.

And how does he do this? Through touch.

You can see the same phenomena at rock concerts. Fans surge with arms outstretched in the slim hope that they can touch their idol; to claim some godliness for themselves.

Put me in a dead playwright’s bedroom and I’m not much better than a screaming fan. It’s as though, somehow, by touching a bed or book or statue that I can be with them in the same moment that they touched it in the first place.

Touch can not only breath life back into people of the past but into the living too.

It is widely held that people in comas respond to touch even when they are in an altered consciousness.

Touch it seems, is a powerful thing.

Not far from Wilde’s tombstone in the Pere Lachaise Cemetery in Paris lies the resting place of another historical figure.

Jim Morrison’s grave is so popular that it is even depicted on tourist brochures.

There are those who stand sentinel at the spot through rain, hail and shine.

Perhaps when Morrison penned the sensual lyrics “Come on now touch me, baby. Can’t you see that I am not afraid,” he wasn’t just referring to the sexual nature of touching that he was known for.

I like to think that he simply knew that there was a hell of a lot more to it than that.

← Three reasons every teacher should become a student
What Are You Looking at? The Voyeur Inside Every Writer →

11 Comments on “The day I kissed a dead man”